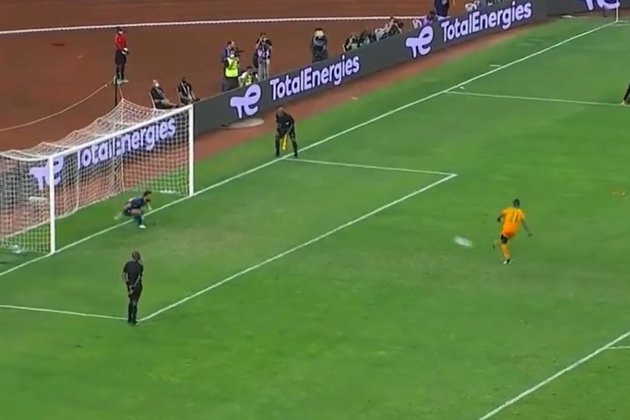 Manchester United and Ivory Coast defender Eric Bailly has been roasted online after trying to pull off a bizarre no-look penalty that dumped his country out of the Africa Cup of Nations last 16 against Mohamed Salah's Egypt.

A 0-0 stalemate in Douala failed to find a winner through 120 minutes of regular and extra time.

In those two hours, Bailly had been faultless in keeping Salah and his teammates at bay, but became the villain from 12 yards out in a decisive penalty shootout.

With the score tied at 2-2, he attempted to mimic the style of his Red Devils colleague Bruno Fernandes with a skip to the ball which he then casually chipped in a Ronaldinho-esque no-look manner.

Unfazed, Egypt's goalkeeper Gabaski simply had to stick out a hand and tip it onto his post.

While this obviously didn't knock the Elephants out right away, it was the only spot-kick missed which ended up allowing Salah to nervelessly tuck away the winner for the seven-time champions to advance the quarterfinals 5-4.

Unforgiving as ever, football fans headed to Twitter to pile on Bailly for his moment of madness.

"Someone should tell Eric Bailly that the Jorginho style of penalty isn't for everyone!" quipped one user in reference to the Euro 2020 champion with Italy.

"Eric Bailly does the right things which mesmerize you then he goes and does something completely silly which just ruins the whole thing!" complained someone else.

"What the hell was he trying to do???" it was asked. "I have never seen him take a penalty before. Oh my God, he desperately wanted to be a hero and it didn't turn out well at all, that was horrible."

"A no-look chip penalty, Eric Bailly is actually built different," quipped a separate party, while also saying that he took "the most Eric Bailly penalty ever".

Premier League enthusiasts went into conspiracy mode and suggested the act was a ploy to keep Liverpool's Salah in Africa as long as possible.

At the same time, it was pointed out that penalty misses have been achieved by a trio of United players at big tournaments recently, as Jadon Sancho and Marcus Rashford also fluffed their lines in the Euros final for England against the Italians at Wembley last summer.

Comparisons were drawn to John Mensah and his similar howler in the 2010 World Cup quarterfinals against Uruguay too.

Like Mensah's Ghana side as Spain went on to win the FIFA showpiece in South Africa, Bailly and his Ivory Coast teammates will now have to watch the rest of the Cameroon-held tournament at home or back in the European cities of their clubs.