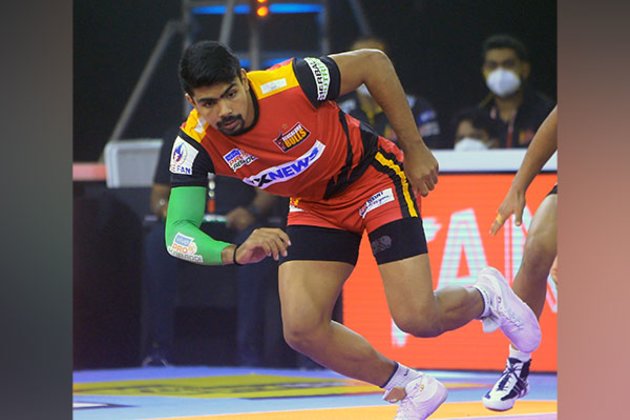 Bengaluru (Karnataka) [India], January 25 (ANI): Bengaluru Bulls will lock horns with U Mumba on Wednesday in the ongoing Pro Kabaddi League Season 8. Both teams beat Telugu Titans in their previous outings and will be eyeing a victory as the tournament enters the make-or-break stages.

U Mumba captain Fazel Atrachali showed glimpses of his best against the Titans and will be pumped for the personal battle against the league's best raider Pawan Sehrawat.

'Sultan' Fazel Atrachali secured his first High 5 of the season and raider Abhishek Singh clinched a Super 10 in Mumbai's previous match. But in Bengaluru Bulls, they face an entirely different unit powered by their captain 'High-Flyer' Pawan Sehrawat who already has 186 raid points in Season 8.

The Green Sleeve holder (given to the raider with the highest points) has been heads and shoulders above his competition and will be looking forward to challenging the Mumbai defence. He is predominantly a left raider which means the game will see Pawan and Fazel face each other often. Fazel knows a corner's work is only effective if support arrives in time and will be telling Rahul Sethpal and Rinku to be on their toes.

Mumbai were the winners when the teams met in the first match of Season 8, but the Bulls have risen in confidence since then. Bharat and Deepak Narwal's emergence as good backup raiders has also ensured Pawan spends lesser time in the dugout. That said, the Bulls are still dependent on their captain for the bulk of the points. Mumbai coach Rajaguru Subramanian will therefore want his defence to be aggressive even if that means leaking points occasionally.

At the other end, Abhishek Singh will hope to target the Bulls defence. His running hand touch has been a treat to watch in Season 8, but he will be running into right corner Saurabh Nandal who is perhaps the league's best at stopping raiders on the move.

Bengaluru might also add a versatile defender like GB More in the starting 7 to add steel to their covers and surprise Abhishek Singh as he moves for the right corner. V Ajith Kumar's form will be vital for U Mumba to match Bulls for the raiding points. He is yet to show his full potential after recovering from a back injury.

A win for Bengaluru will consolidate their position on top of the points table. U Mumba, meanwhile, will be eyeing all 5 points to ensure they stay in the hunt for a playoff spot. (ANI)